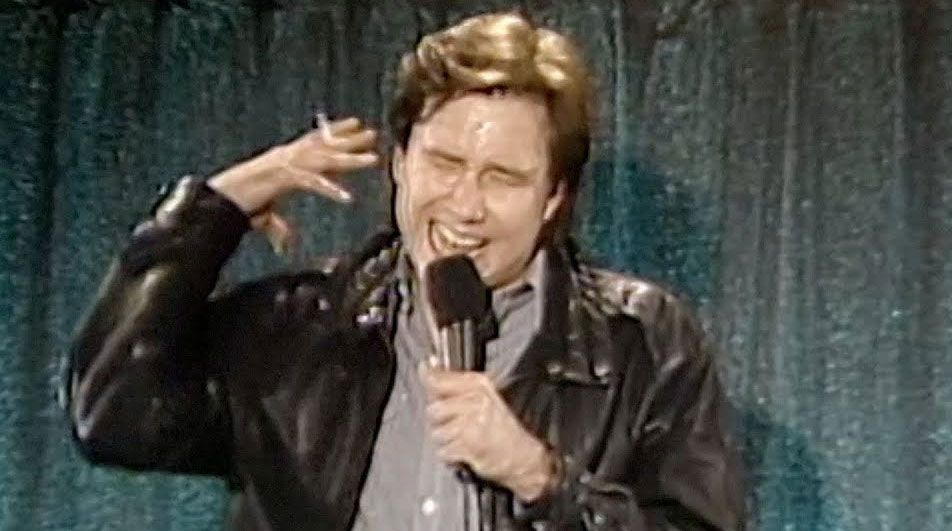 “This was supposed to be the introduction to a new edition of Cynthia True’s American Scream, a terrific biography of Bill Hicks. But the new edition didn’t happen. It’s twenty years, today, since he left us, so I figured this was as good a time as any to put it out there. Seek out Cynthia’s book. It’s good reading.”

I am very aware of how important he was. But his stuff never made me laugh.

He was just…before my time. Too too soon for me, and me born too too late. Growing up on Bill Cosby and George Carlin and Richard Pryor and then Steve Martin and Monty Python – all of them, and so many more – I couldn’t go back and listen to Lenny Bruce with new ears. I knew enough about history, about the sterile, cultural neck brace that America wore in the late 50’s and early 60’s, to realize just how revolutionary and foolhardy and essential Lenny Bruce was, but…

…he never made me laugh.

There are a startling number of comedians my age (and younger!) who say how funny they thought Lenny Bruce was, how much he cracked them up. And I suspect – fuck it, I know – they’re lying. They’re not lying out of self-aggrandizement or even fear. It’s just – they know how important Lenny was, especially in terms of what they do now, onstage, that they assume he’s also, to them, hilarious. Maybe they even convince themselves, when they listen to an old concert, that he’s genuinely making them laugh.

None of what I’m saying is meant to lessen Lenny Bruce, as a performer or barrier-breaker. If anything, it’s a tribute to how iconic his material is – like Ornette Coleman’s music, or Ozu’s films or Wallace Stevens’ poetry – there’s an ever-renewing army of connoisseurs within his field who will always assert that he’s hilarious, that he’s a primal influence, that he’s a source.

Which brings me to Bill Hicks, and the equally strange legacy he leaves behind after his death. We’ll get to that later. And no, I’m not going to make the silly claim that there’s a direct line between Lenny Bruce and Bill Hicks. The path of influence in any art form is never a straight line, nor is it ever a “passing on” of a real or symbolic baton. Influence and homage are a tangled radio-burst of infectious particles, and there are as many side-steps, diagonal shuffles and pivots as there are clean strides forward. So let’s take a few steps backward here, to the people who followed Bruce, and laid the path for Hicks.

Lenny Bruce didn’t just use language as a weapon – he showed how, oftentimes, the weapon of language was pointed at us – by us. George Carlin took the weapon and treated it like a wicked toy, which, in many ways, was even more shocking.

Meanwhile, Dick Gregory and Bill Cosby were kicking down doors using different forms of judo – Gregory with frank, withering exposure of the racial tensions he lived with every day; Cosby by being so undeniably hilarious and brilliant that he made the fact of his blackness a moot point (and also secretly funding Sweet Sweetback’s Baaadasssss Song).

Then along comes Richard Pryor, taking his id out for a walk and showing that everyone, black and white, had the same core fears, desires, and triumphs – and people filled theaters and cinemas to hear him say it.

By the time Bill Hicks started doing stand-up comedy, the form itself had calcified into the comfortable, brick-wall-and-two-drink-minimum that all of America saw on basic cable all through the 80’s. The feats of derring-do that Bruce and Carlin did with language in the 60’s and 70’s had become crass wordplay. Dick Gregory’s gentle yet explosive racial truth-telling had soured into facile “white people/black people” comparisons. Cosby realized, to his horror, that his opening the door for comedians who just happened to be black created a generation of comedians who only talked about being black. The same fate befell Pryor – he’d opened a door that led to a deeper emotional freedom for performers who followed him, yet most of them never went deeper than saying, “motherfucker” constantly. And Steve Martin’s meta-textual commentary on smarmy, shallow comedians created a new breed of…smarmy, shallow comedians. Barrier-breaking, darkness, risk and danger had all been co-opted, and any taste the audience had for the new had been dulled by a thousand baskets of mozzarella sticks and an ocean of over-priced blender drinks.

Which is what makes Bill Hicks’ achievement all the more miraculous, when you put his comedy into the context of the time he did it. Lenny Bruce had to punch through an icy wall of Eisenhower-era repression. But Bill Hicks had to make his voice heard through the amorphous, ever-shifting fog of Reagan-era comfort and complacency. Comedy club audiences in the 80’s actually thought they were being revolutionary and dangerous, listening to a sport-coated, sleeves-rolled-up comedian railing against the absurdities of airplane food, the plot holes on Gilligan’s Island and the differences between cats and dogs. Like Kurt Vonnegut’s Kilgore Trout, laying down world-saving truths in the pages of disposable stroke magazines, Bill Hicks was trying to light the way into the 21st century – on the stained-carpet stages of strip mall chuckle huts, usually following a juggler.

I emceed for Bill Hicks in 1991, at Charlie Goodnights in Raleigh, North Carolina. It changed what I wanted to do with comedy, almost instantly. Before Hicks, I was focused only on being liked. After Hicks, I was focused on discovering, together with each audience I stood in front of, why I liked what I liked. And how far I could take the things I liked and still get laughs. Years later, I traveled to watch him at the Comedy Works in Philadelphia. After I moved to San Francisco, I saw him at the Punchline in Walnut Creek and one last time at Cobb’s. Then he was gone.

We only spoke once, all those years ago at Charlie Goodnight’s where, after a particularly rough set of mine, where I was more focused on impressing him than actually making the audience laugh, he said, “You gotta walk ‘em to the edge, Patton.”

At Walnut Creek, after a table of suburbanites quietly walked out, a woman asked him. “Don’t you believe in God?”

I’m telling you all of this so it’s on record – I worked with Bill Hicks once, saw him live three more times, and had a single, brief, back-and-forth conversation with him. That’s it.

Because here’s where we get to, I think, the true, eerie similarity between Bruce and Hicks. Bruce is a comedian whose comedy remains very much of its time, but whose importance has swelled outside of the short space he was allowed to stomp through history. Yet there is a cult of comedians who claim him as an influence, even though they don’t really laugh at anything he said.

Now here’s Hicks, whose comedy becomes funnier (and, especially these last few years, more prophetic) as history swallows him up, who’s generating a cult of comedians who claim they were his best friend.

I’ve seen at least half a dozen instances of this. And I’m not going to call anyone out on it, or name names, because I understand the impulse. But their claims of friendship and brotherhood can’t be true. Bill Hicks was friendly, and polite despite his cynicism, but one thing he did not gather around him in abundance were “comedian” friends. He had a vast network of close relationships, but not with the people I see now, people who worked with him for the same short time I did, who now claim they were “best friends” with Bill. He more often than not kept his own council, and watched the world.

I don’t know what sparked this phenomenon. Did the same thing happen to Lenny Bruce after he died? Is that another sign of the greatness of one’s spirit, that after you’re gone people try to gin up their personal stories by writing you into them? I don’t know. Maybe it’s their waking wish to go back in time and become friends which someone like Bill Hicks. Hell, if I were back in the early 60’s, I’d want to hang out with Lenny Bruce. Or Jonathan Winters.

None of us is ever going to hang out with Bill Hicks, ever again. I never did, not really. Does this desire for closeness to Bill come from the gut-wrenching fact that the frenzied lead-up to and vertiginous arrival of the 21st century happened without Bill Hicks commenting on it? The O.J. trial, the Lewinsky scandal, the explosion of the internet, the 2000 election, the collapsing of the Towers. Everything.

Luckily, Bill Hicks’ influence and legacy is more focused and active than what Bruce, Carlin, Cosby, Gregory, Pryor and Martin wrought. Because even now, on countless, stained-carpet stages, and a galaxy of grainy YouTube channels, the same righteous, exasperated wonder with this new millennium – and the same weary love that Bill Hicks had for all of humanity – is making itself heard. We can’t ever have Bill Hicks again, but there’s time enough, and talent enough, to walk through the doors he opened.